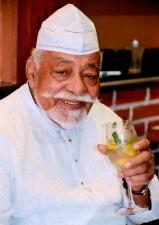 Shri Mohammed Imtiyaz Qureshi is among the best known chef around India, who is widely recognised across the world for his role in globalising the Indian Culinary Arts and reviving the age old Awadhi DUM Pukht Cuisine.
Shri Qureshi has come a long way since his days as a teenage Bawarchi in Lucknow. Putting Awadhi cuisine on the serine, he has created an enduring legacy in the 70-odd years he has spent in the industry.
He has the restaurant brand Bukhara and DUM Pukht which are considered among the world’s best Indian restaurant. He created world famous Dale Bukhara and devised the Tandoori chicken recipe without color at the Bukhara restaurant.
He has the honour of serving Awadhi cuisine to various dignitaries and leading figures of the country including Dr Zakir Hussain ,former President of India and various Prime Minister of India.His delicacies were also savoured by the then US President SHRI Bill Clinton, Spanish Prime Minister and Microsoft founder Shri Bill Gates. Besides this he is recipient of numerous awards.